Disney vs. Netflix: Which company deserves your money?

DDuring the early stages of the pandemic, the world was shut down and people rushed everywhere to find new sources of entertainment to stay busy and keep their cool. Looking back, we found ourselves in a less than ideal situation, to say the least.

However, online streaming services helped keep our spirits up, and for those in positions within these companies, the mood was even better. Subscribers have flocked to these services, and that has largely paid off for many investors exposed to the streaming arena.

While all hope was lost for Disney’s beloved theme parks, the company was able to capitalize on a brand new streaming service that had just hit the market a few months prior – Disney Plus+. It was a pretty lucky time for the company. Additionally, the company also has operations with ESPN+ and Hulu streaming services.

Netflix had already established itself as the benchmark for streaming entertainment, so there wasn’t much fear around the company’s stock whenever the world shut down.

Year-to-date, both stocks have suffered, but Disney stocks have shown a much higher mix of valuable defense than Netflix stocks.

It’s an all-out battle between these two streaming giants. Both companies have similar operations in the streaming space, but there are always ways to decide which company deserves your hard-earned money and has a higher likelihood of success in the future. Let’s find out.

The shares are now trading at an absolute fraction of all-time highs near $700. In fact, the slump in equities sent its forward price-to-sales ratio back to 2.4X, off 2018 highs of 11.3X and well below the 7.7X median over the past five years. Moreover, the current value of the metric is the lowest ever recorded during this period.

Subscriber count is arguably the most critical metric NFLX currently has. In FY20, the company’s subscriber count climbed 32% from FY19, primarily due to stay-at-home orders during the pandemic.

However, the growth story has recently taken a turn for the worse; in its latest quarterly report, NFLX provided discouraging indications that it expected a decline of nearly two million subscribers for the next quarter. Additionally, its latest quarterly report revealed that NFLX lost 200,000 subscribers during the quarter, its first subscriber loss in a decade. Netflix expected net subscriber additions of 2.5 million – shares fell 35% the following day.

Netflix’s balance sheet is debt-heavy; the company used immense debt to fuel content creation. This development becomes even more alarming amid a hawkish Fed raising interest rates, limiting their ability to borrow so heavily and dampening future growth. NFLX’s cash ratio is 0.78, which means it may struggle to repay its short-term obligations. 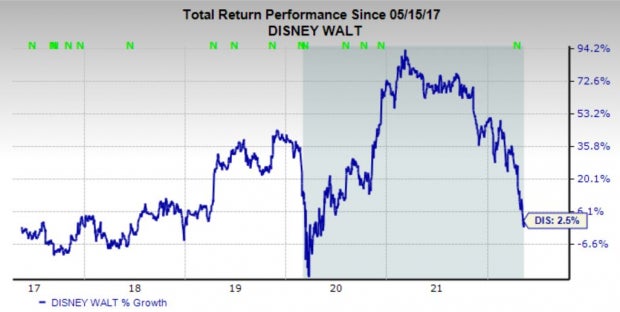 Midway through the selloff, Disney’s forward price-to-sales ratio declined to 2.2X, well below the 3.1X median over the past five years and well below 2021 highs of 5 ,3X. Moreover, the valuation metric is the lowest on record since the first months of 2020.

Like NFLX, subscriber count is a critical metric for business. The Disney+ service has enjoyed considerable success, giving consumers access to some of the most legendary film franchises, such as star wars and Avengers.

Going into the quarterly report, many thought that since NFLX had been losing subscribers throughout the quarter, Disney must have some as well. This turned out to be untrue, as Disney boasted strong net subscriber additions for the quarter, capturing 7.9 million subscribers against the expected 4.5 million. Additionally, Disney+ remains on track to achieve its goals of 230 million to 260 million paid subscribers by the end of FY24, which would surpass NFLX in total subscribers.

Disney has also used the debt to fuel its content creation and the options available within its services. Similar to NFLX, this may be a problem for the company at a time when the Fed is raising interest rates. However, Disney’s cash ratio is 1.01, showing an ability to meet short-term obligations.

While Netflix was at one point a stock that investors would buy without hesitation, that story has changed course significantly. A slowdown in the company’s growth put shares at levels not seen in years, while erasing the massive gains it had acquired.

On the other hand, Disney has burst onto the streaming service with its much-loved Disney+ service, and subscribers continue to pile in. Disney+ hasn’t been the only success, as ESPN+ and Hulu are also constantly adding new subscribers. Additionally, Disney’s earnings are expected to rise by 1.2% for the current year, while Netflix’s estimates call for earnings to increase by 0.3%.

Disney showed no slowdown in total subscribers, has a higher cash ratio and a much more attractive price-to-sales ratio. Plus, Netflix’s growth story was thrown out the window. For these reasons, I think Disney would be a much better investment moving forward.

Zacks names ‘only one best choice for doubling up’

From thousands of stocks, 5 Zacks experts have each picked their favorite to skyrocket by +100% or more in the coming months. Of these 5, Research Director Sheraz Mian selects one to have the most explosive advantage of all.

It’s a little-known chemical company that’s up 65% year-on-year, but still very cheap. With relentless demand, rising earnings estimates for 2022 and $1.5 billion for stock buybacks, retail investors could step in at any time.

This company could rival or surpass other recent Zacks stocks which are expected to double, such as Boston Beer Company which jumped +143.0% in just over 9 months and NVIDIA which jumped +175.9% in one. year.

Free: See our best stock and our 4 finalists >>

2022-05-13
Previous Post: Price: Eastlake Castle Condo or West Seattle Vintage Home?
Next Post: ‘I lied to everyone I met’: how gambling addiction has taken over women in the UK